Roamer spent four days at the Big Bang Event at London’s ExCel Centre.  Over 60,000 Students attended this STEM Interactive Spectacular.  Primary and Secondary schools children were challenged to program Roamer to find a route through a matrix of numbers and operators.  The school who got the best score on the day went into a draw to win a Roamer.  Kate Hudson reports on  a great four days and announces the winning schools. 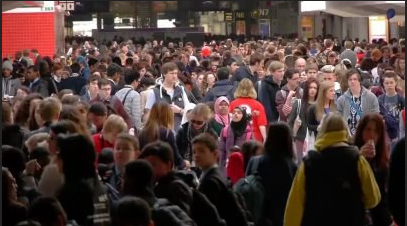 It really was this busy. Large crowds of students eager to interact with the many STEM exhibits.

When first asked to provide a Roamer activity for the Maths Zone at The Big Bang Experience I knew that it had to be fun.  Something that would engage children but really challenge them, that they would feel they could do but would differentiate by outcome.  I recalled many years ago visiting Bancroft School in Essex.  Even though it was a secondary school, they regularly  held a “Roamer Olympics” ; one of the challenges created by Stephen Woolley,  required students to find a route through a mat making the biggest number possible. 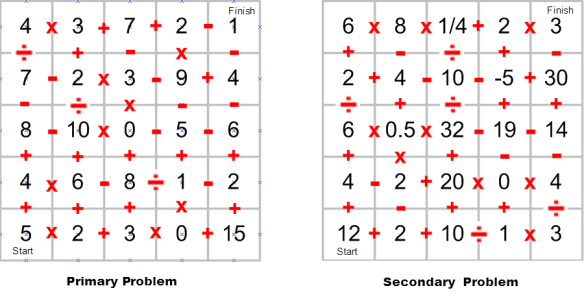 What I hadn’t anticipated was just how much it would grab the imagination of all ages.  Our youngest entrant was from Reception class and our oldest a Grandad.  Nor did I anticipate how many people would call back to find out “the largest number so far”, or would have another go to see if they could find a bigger number.

On Thursday and Friday groups of school children worked together on the challenge.  They came from as far afield as Newcastle and Devon.  I was astonished at the range of results that could be produced from the game.  Each new result seemed to get higher and higher and I would be convinced that that must surely be the biggest number.  When, early on Thursday Aaliyah  Oshodi, Bille Edwards and Bila Turvey of Christs Hospital School produced a total of 1032 from the Secondary mat I was convinced they must have found the best route. But it wasn’t long before their classmates Henry Hunt and Connie Blott managed to program Roamer® to find a total of  12,654. This was then matched by Jack, Daniel and Gerti of Walworth Academy, only they were 5 years younger! It wasn’t long before George Benbow of Q3 Academy had produced a total of 47,934 and Matthew Cart of Etone College impressed everyone by programming Roamer® to complete the route all in one go. 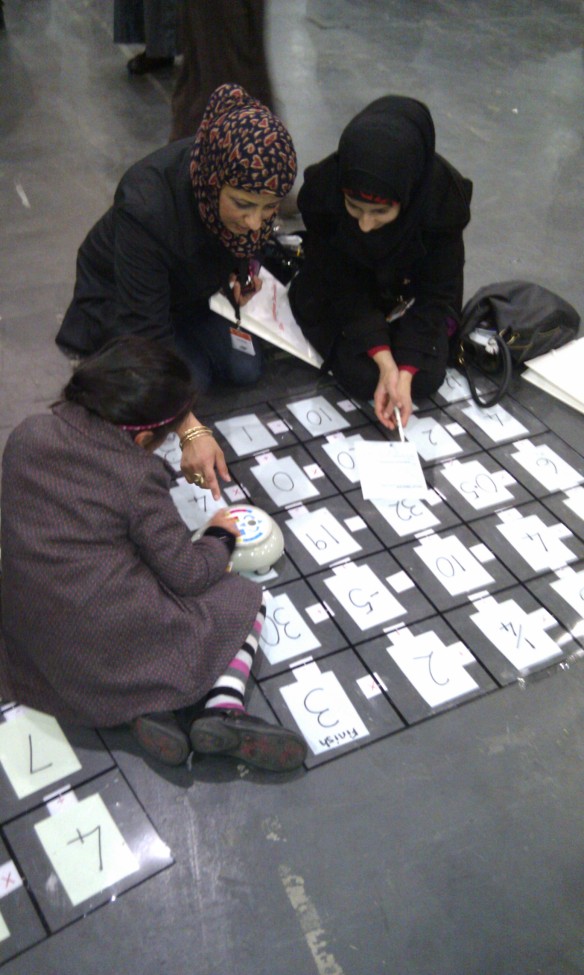 Bleona, Jacqueline and Jada of New City Primary school were on spectacular form and found a total on the primary mat of 28,930. Unfortunately they had done a X2 instead of a +2, so their total was actually 17,589. It took the girls of  Al-Noor Primary School to find the absolutely best route.  Their teacher assured me that they were very good at Mathematics and so it proved.  They carefully considered all the options and programmed Roamer® to move step by step once they had decided on their chosen route.

Special mention should go to 5CS of John Gulson Primary School who chose to tackle the Secondary mat with its fractions and decimal points and the girls of Streatham and Clapham High who showed brilliant teamwork, listening to each other and taking it in turns to program the robot.

Over the weekend it was families visiting and once again I was impressed at how far they had come – one family having set off at 6.15 from Blackburn.  I particularly enjoyed watching Mums and Dads working with their children to find a solution.  Inevitably  the sort of parents who would take the time out to take their children to an interactive exhibition like the Big Bang are the sort who will work with their children on just such a challenge, encouraging them and helping them.  And as all teachers know they are the sort of parents who produce happy successful children.

Our very first participant , Seth Govinda-Bestwick from Dunraven School immediately jumped to four figures on the “easier” mat and was immediately replicated by Oliver Greenwood of Dane Alice Owen’s School.  Then Ashton Builes from Leigh Academy snuck ahead of them.   I was very excited when Olivia Vidal of Ark Atwood Academy produced 46,713 but unfortunately she had used a couple of squares twice so it wasn’t a valid route, even so I knew we were in for a tight fight.

Meanwhile 12 year old Alice Bennett-Clough of Newstead Wood Grammar School had produced a staggering 371,000 on the other mat, beating final year University of Bath student Fiona Lewis, who only managed 204,978.  But it was Lucy Greenwood of New Hall School who realised that ÷ ¼ actually means x 4 and so managed to produce the best total of the four days with 759,888

The winners of Roamers for their schools were

See you at The Big Bang Experience next year!